This is Part Two of The Illuminati Files by Brenton Clutterbuck. If you missed Part One, here you will find A Conspiracy is Born.

Or at least not much. While the Illuminati had copped the blame for trying to challenge the power of church and state in Germany (a fair cop), instigating the French Revolution, and interfering with the founding years of the United States (both substantially less likely), for most of the late 1800s, concern about the Illuminati died down, only to return mutated and with a vengeance in the 1900s. Conspiracy author Nesta Webster brings them back in 1919, characterising them as a Jewish conspiracy dating back to the days of Jesus. She produced several works across her lifetime about the Illuminati. In 1965, the rightwing monthly The Cross and the Flag published by Gerald L. K. Smith featured an article that named the Illuminati as the second most important enemy in the world (pipped to the post by those dastardly world bankers!) Around the same time, a man named Robert Welch was beginning his own crusade against the Illuminati, via the organisation he founded — the highly influential rightwing organisation, the John Birch Society, which characterised the Illuminati as the precursor to Communism.

We find ourselves in the United States of the 1950s and 1960s, in a society being rocked by social change and in an environment where conspiracy theory (some of which would ultimately be proved correct!) was running wild. Campaigns of propaganda helped to overload the bullshit detectors of many, and very quickly, large numbers of people developed the firm suspicion that somewhere, someone was doing something, and whatever it was, it wasn’t good.

Into this paranoid stew of confusion and confoundment, came a new religious movement. It was called ‘Discordianism’, and perhaps unsurprisingly it was obsessed with chaos, disorder, and the impossibility of reaching out to grasp objective truth. Truly, this was a movement of its time. 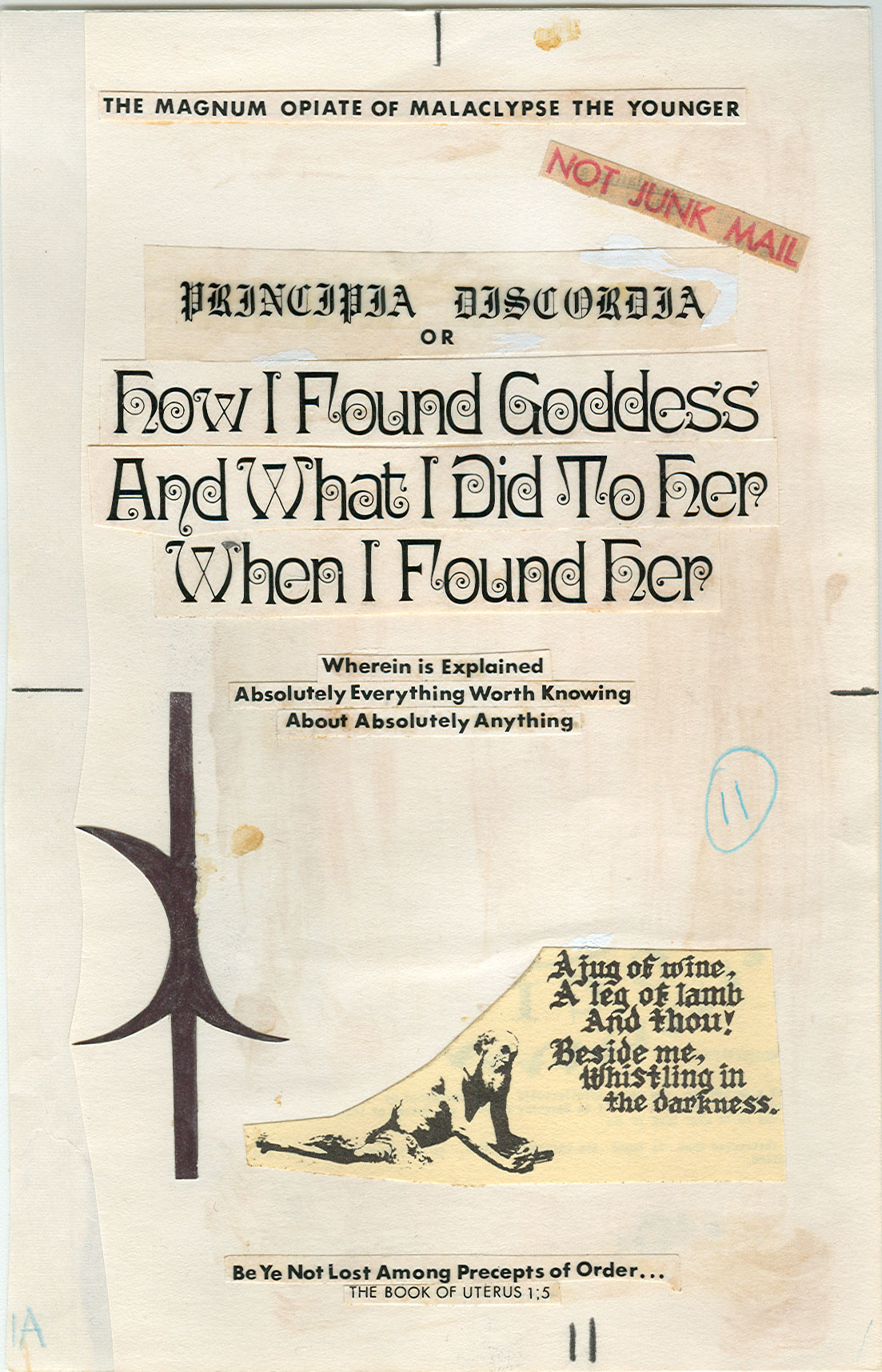 The front piece to the Paste-Up Discordia (The Sacred PUD). Courtesy the Discordian Archives.

With such fixations of the nature of truth, confusion, and the great unknown, it is no wonder that many Discordians were themselves entranced by ideas of conspiracy. The Principia Discordia, among other Discordian materials, satirised this re-emergence of Illuminati fever. Riffing on the Illuminati led to the ‘Illuminati letter’ appearing in the Principia Discordia. As with much of the PD, it is influenced by a mixture of sources.

Episkopos Mordecai, Keeper of the Notary Sojac, informs me that you are welcome to reveal that our oldest extant records show us to have been fully established in Atlantis, circa 18,000 B.C., under Kull, the galley slave who ascended to the Throne of Valusia. Revived by Pelias of Koth, circa 10,000 B.C. Possibly it was he who taught the inner-teachings to Conan of Cimmeria after Conan became King of Aquilonia. First brought to the western hemisphere by Conan and taught to Mayan priesthood (Conan is Quetzlcoatl). That was 4 Ahua, 8 Cumhu, Mayan date. Revived by Abdul Alhazred in his infamous Al Azif, circa 800 A.D. (Al Azif translated into Latin by Olaus Wormius, 1132 A.D., as The Necronomicon.) In 1090 A.D. was the founding of The Ismaelian Sect Hashishim) by Hassan i Sabbah, with secret teachings based on Alhazred, Pelias and Kull. Founding of the Illuminated Ones of Bavaria, by Adam Weishaupt, on May 1, 1776. He based it on the others. Weishaupt brought it to the United States during the period that he was impersonating George Washington; and it was he who was the Man in Black who gave the design for The Great Seal to Jefferson in the garden that night. The Illuminated tradition is now, of course, in the hands of The Ancient Illuminated Seers of Bavaria (A.I.S.B.), headquartered here in the United States.

Our teachings are not, need I remind you, available for publication. No harm, though, in admitting that some of them can be found disguised in Joyce’s Finnegan’s Wake, Burroughs Nova Express, the King James translation of the Holy Bible (though not the Latin or Hebrew), and The Blue Book. Not to speak of Ben Franklin’s private papers (!), but we are still suppressing those. 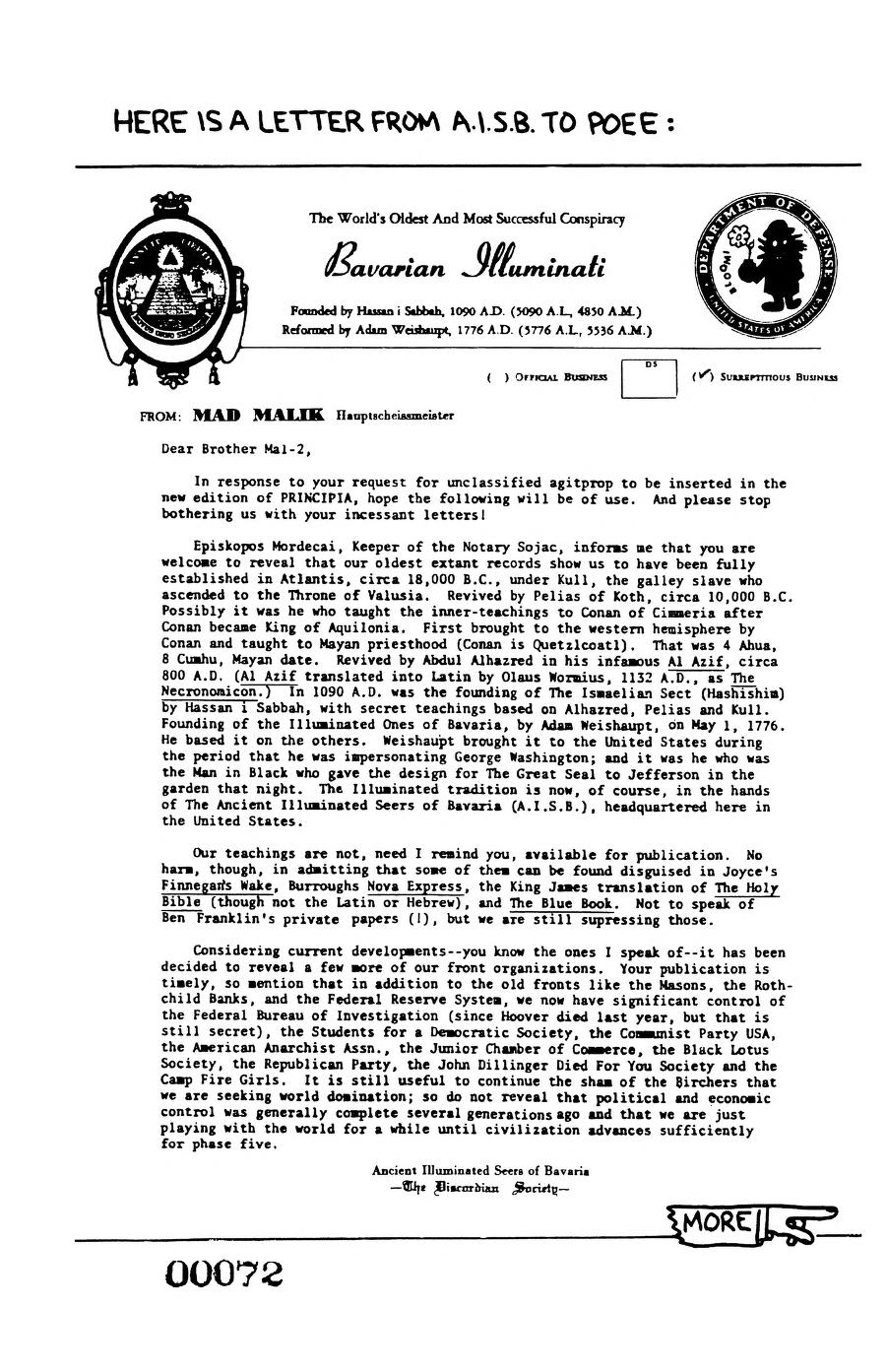 The letter goes on for quite some time, but luckily for the human race, the Discordian articulation of the Illuminati quest turned out to be actually, pretty wholesome!

Look, if you people out there can keep from blowing yourselves up for only two more generations, then we will finally have it. After 20,000 years, Kull’s dream will be realized! We can hardly believe it. But the outcome is certain, given the time. Our grandchildren, Mal! If civilization makes it through this crises, our grandchildren will live in a world of authentic freedom and authentic harmony and authentic satisfaction. I hope I’m alive to see it, Mal, success is in our grasp. Twenty thousand years….!

Ah, I get spaced just thinking about it. Good luck on the Principia. 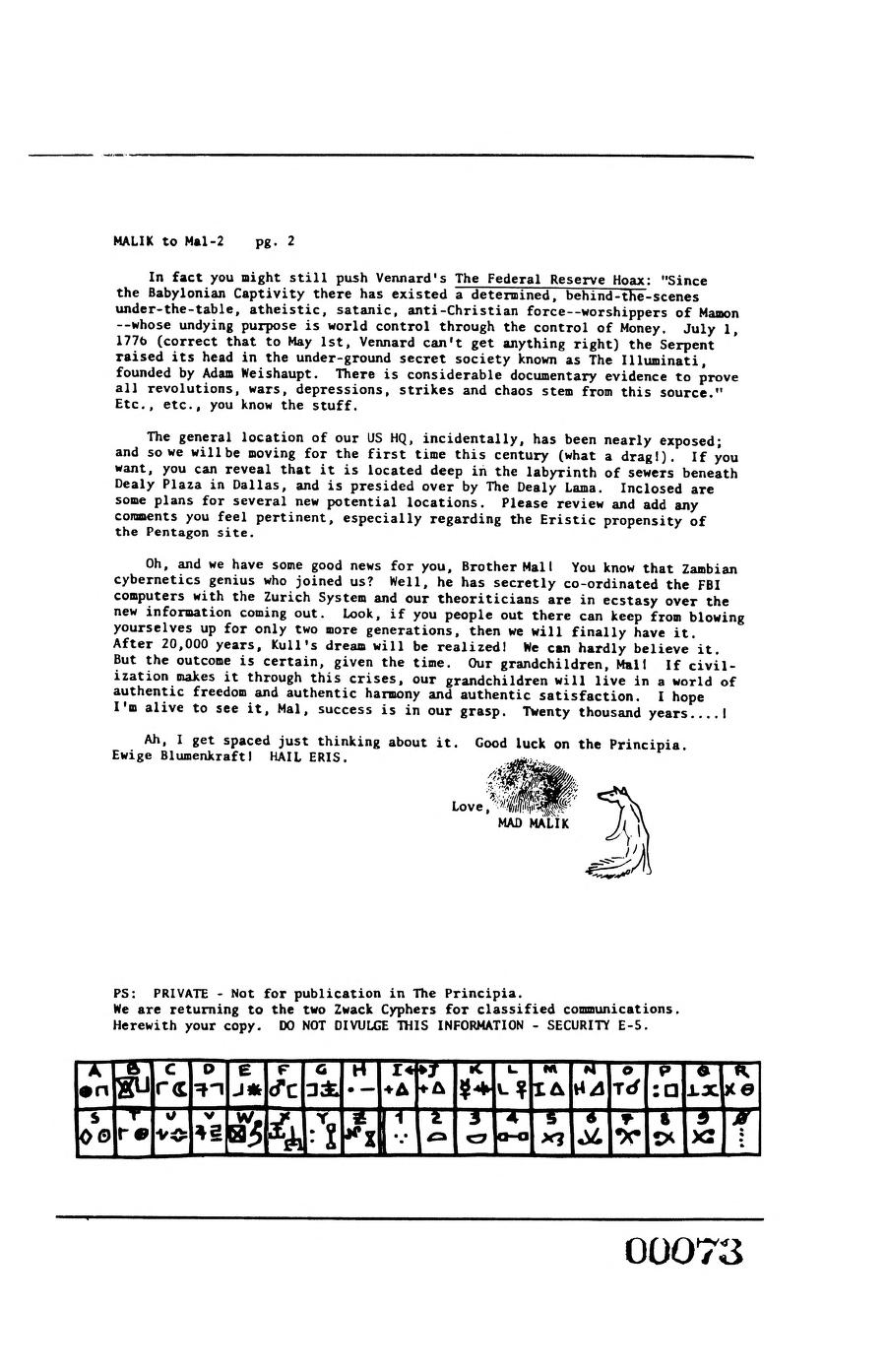 Also included in the preceding pages are an advertisement for the Bavarian Illuminati, and a telegraph, apparently from the illuminati to the Discordians, with a comically unbreakable cypher that could be used to permanently render incoherence to any sensitive messages (let’s just hope nobody —ever— needs to decode them!).

Discordian elder Robert Anton Wilson got on board the Illuminati train in a major way. He had been drafted into the Discordians in ’67, but they wouldn’t provide his first exposure to the Illuminati conspiracy. By the time the Discordians drafted him into their weirdness, he’d already been working at PLAYBOY‘s letters section for two years, alongside co-conspirator Robert Shea. PLAYBOY — being a magazine dedicated to all kinds of sexual and moral freedoms — attracted the attention of those who felt their freedoms were being infringed on in the most bizarre and unbelievable ways. This ‘nut mail’ from some of the more paranoid PLAYBOY patrons inspired Wilson and Shea to write a series in which all of the conspiratorial fantasies of their readers were 100% true. The resulting novel The Illuminatus! Trilogy returned to the more sinister power-hungry characterisation of the Illuminati. 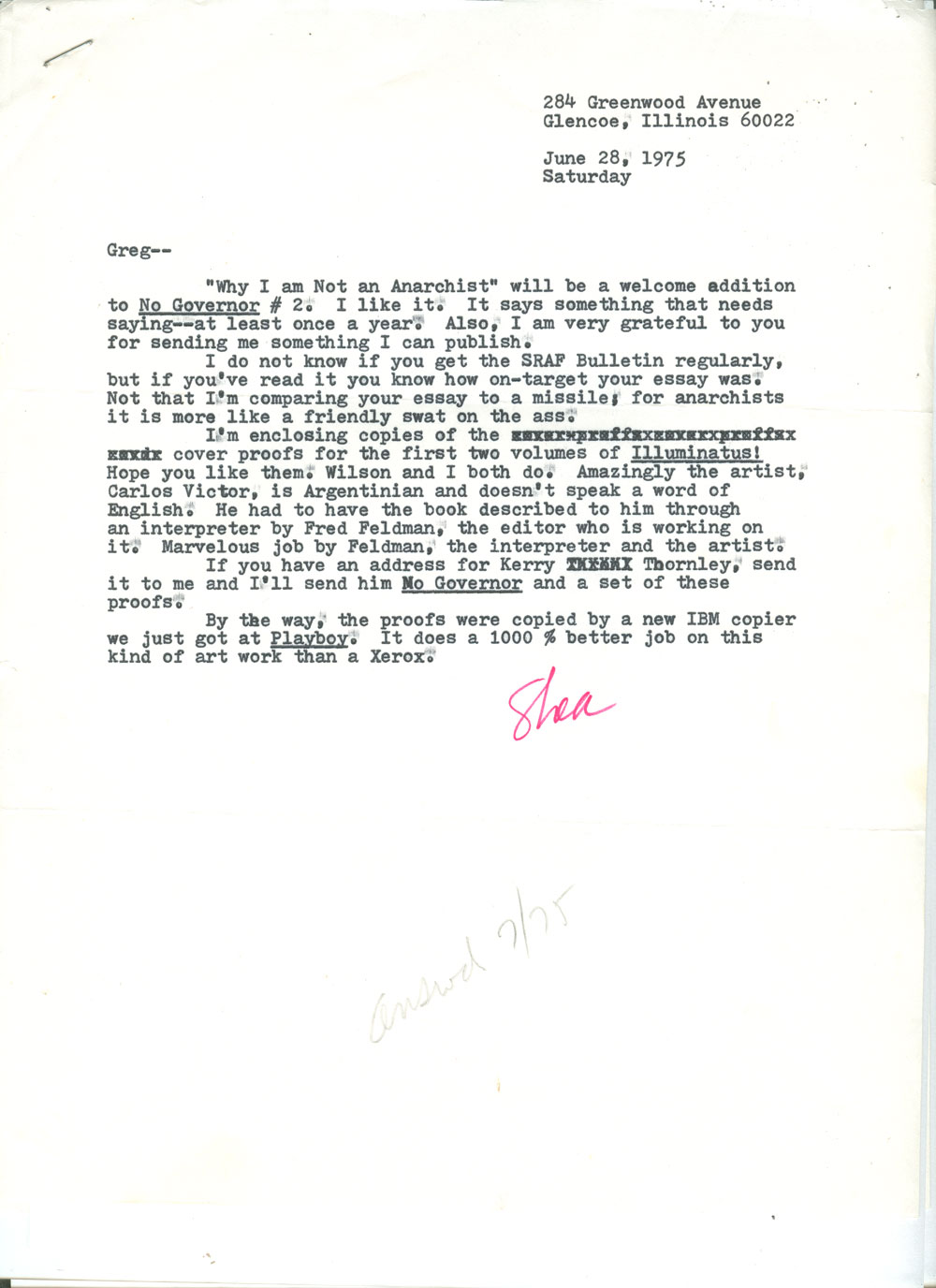 The work was already invested in exploring the most deranged and bizarre (though not, of course, impossible) theories about who controlled the world. Wilson and Shea further muddied these illuminated waters of truth by sneaking articles into publications under assumed identities years before, then quoting those sources in their fictional trilogy to develop a strange and unreliable synthesis of truth and fiction. The book was about conspiracy, was produced as the result of conspiracy, and was a satirical exploration of a phenomenon that was far from just a light-hearted joke. 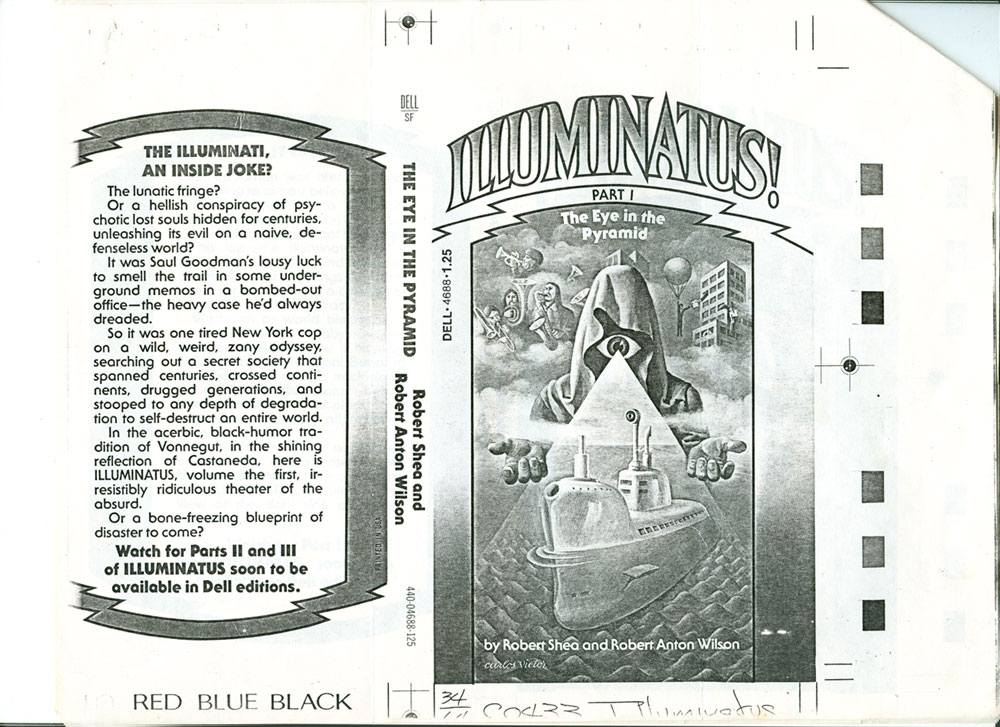 Robert Shea letter to Greg Hill, The Eye in the Pyramid book cover proof attachment, June 25, 1975. Courtesy of bobshea.net from the Discordian Archives. 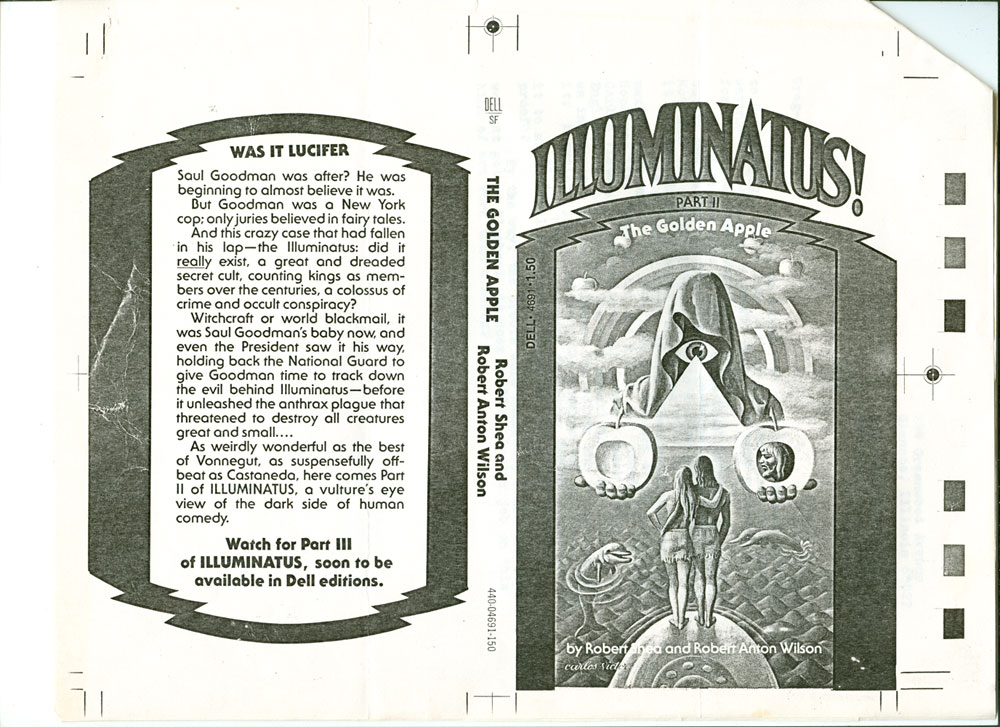 Illuminatus! of course then became another significant popularizer of the modern Illuminati mythos into popular culture. It also popularised the new foundation myth alluded to in the Illuminati letter from the Principia — that the Illuminati originated from the Islamic Assassin cult led by Hassan-I-Sabbah — though they attributed this idea to the John Birch Society.

Illuminatus! as a work, seems to have had a wide influence, although its authors would surely have liked to see more of that influence translate into royalties! It’s been speculated that the work influenced Umberto Eco, whose work Foucault’s Pendulum shares a number of similarities with the Illuminatus! Trilogy. More recently Dan Brown’s Angels and Demons also portrayed the Illuminati within the substance of its plot.

Steve Jackson Games, whose forays into the fringe frequently step into Discordian territory, loosely adapted the Trilogy into a board game (if it had been a ‘tighter’ adaptation they would have had to pay!).

The KLF, music weirdos who burned a million pounds, were also influenced by Illuminatus! Both members were exposed to the Trilogy through Ken Campbell’s epic 10 hour theatre adaptation of Illuminatus!, and this influence can be seen explicitly through the first name they took; The JAMS, a reference to the Illuminatus! Trilogy. 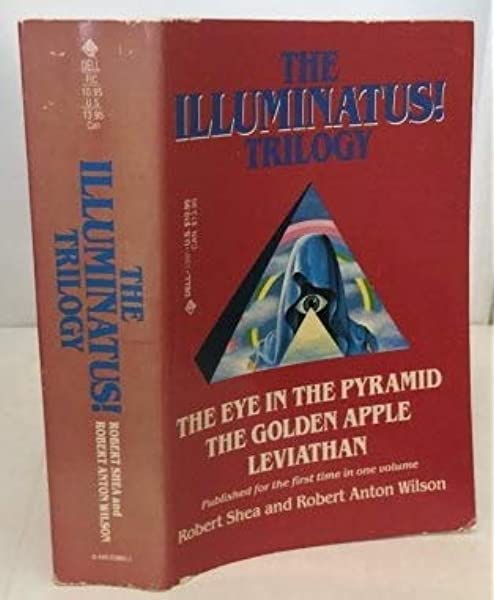 From here, the flow of influence for both the Illuminatus! Trilogy and the Illuminati mythology get pretty hard to track. You can see the source of a trickle, but how do you point to the home of a wave? With the hippie movement as a powerful vector, the Illuminati entered the public consciousness, permeating vast swathes of public life and awareness.

When I was doing my interviews for Chasing Eris, I spoke with Ben Graham who gave one example of how awareness of the Illuminatus! Trilogy, and the associated conspiracy consciousness passed from hippies to members of the electronic scene.

Because of the ravers that had been having free festivals out in fields, [members of the electronic scene] ended up teaming up with guys who’d been having hippy rock festivals in fields forever. Those guys ended up getting into a lot of techno music, but they would have been guys who were reading the Illuminatus! books in the early 70s. It had the whole kind of esoteric hippy knowledge and stuff behind it… You had the club rave kids meeting the hippy travelers, one side being electronic techno music and ecstasy, and the other bringing this kind of like hippy philosophy and ethos and knowledge and it all kind of crossing over. And certainly I think a lot of the kind of Illuminati ideas. Suddenly it became cliché to be referencing the number 23 for one thing.

As for the Illuminati itself, well, today it is Well Known enough that the very term has become a euphemism for any vaguely shadowy institution. When some say ‘the Illuminati’ control the world, they perhaps don’t mean Weishaupt’s group, but instead ‘the Deep State’ ‘the Ruling Class’, ‘the Bourgeoisie’, or maybe ‘the Shadow Government.’ Maybe, in some sense, they are all absolutely right.

The Illuminati perhaps remains so powerful in the public consciousness today because it speaks to the need to fill in the gaps — the dark shadowy gaps — in our knowledge of the world. Every trove of top secret documents that spills out from a Wikileaks page or a pastebin, every release of unclassified documents, every whistle-blower and truth-teller betrays the existence of a murky world of conspiracy that lives beneath the surface of our otherwise normal and logically consistent existence. Voltaire once said that if God didn’t exist, it would be necessary to invent him. Perhaps the same is true of a Godlike conspiracy. Fortunately, Adam Weishaupt did us that favor many years ago, and things have only been getting stranger ever since.